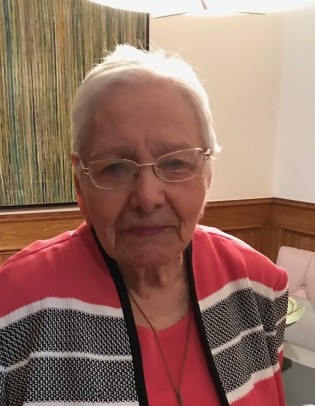 Mrs. Anita G. Medina passed away peacefully in the presence of her daughter and loving staff at SanJuan Nursing Home, San Juan, Texas on September 20, 2020

She was born on November 5, 1923, in Runge, Texas but grew up in La Rosita, Texas. As an adult she lived a few years in San Antonio returning to La Rosita with her daughter after the death of her husband. She considered La Rosita in Starr County as her home.

She was preceded in death by her husband, Max G. Medina, her parents Abraham Garza and Victoria Naranjo de Garza, her brothers Antonio, Abel, and Alonzo and her sisters
Amalia G. Schultze, Manuelita G. Guerra and Alicia G. Herbert.

She is survived by her daughter Victoria Y. Medina and her beloved nieces and nephews, grandnieces and grandnephews.

Anita was very dedicated to her family, her church Santa Rosa de Lima, and her community.
At church, she served as a CCD teacher, Sacristan, and Eucharistic Minister serving the homebound due to age or illness.

Anita and her sister Manuelita visited several European countries, Israel, the former Yugoslavia, and also traveled through Mexico.  Besides traveling she enjoyed international cuisines, 1940’s big band music, country music, and opera. She enjoyed attending Broadway musicals and ballet. Dancing and singing were in the mix.

It was a life well-lived. As one of her nephews-in-law wrote about her, “...she lived a life she chose and shared love and kindness with all who met and conversed with her. A person of superior humbleness and caring that bespeaks of a life well-lived.”

Her daughter and her nieces and nephews wish to thank San Juan Nursing Home and Hospice Compassion Care Services for the love, support and care they provided her.
She called SJNH her home and she would always say, “I love, love, love them.”

No funeral plans are in place at this time. However, in lieu of flowers or anyone wishing to honor her memory, a donation to SanJuan Nursing Home- 300 N. Nebraska Ave., San Juan, Texas 78589 would be greatly appreciated.
Sent from my iPad

To order memorial trees or send flowers to the family in memory of Anita G. Medina, please visit our flower store.
Send a Sympathy Card