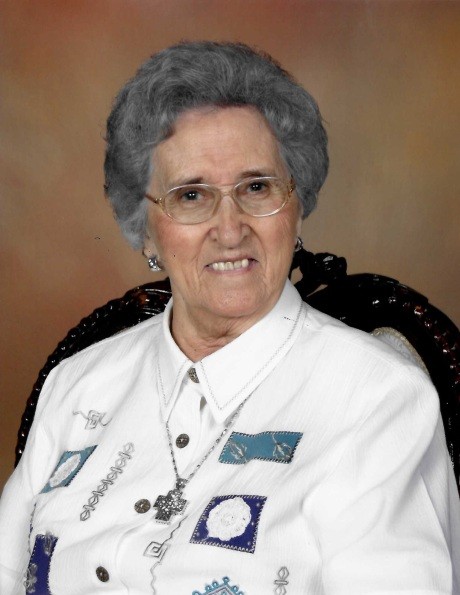 
El Sauz, Texas — Benita Gonzalez Guerra passed away peacefully on August 15, 2021, at the age of 101.
Born to Julian Jr. and Librada Gonzalez in Rio Grande City, on December 3, 1919, she was the 3rd of 11 siblings. Benita married Nicasio Guerra of Mirasoles Ranch in April of 1938 and left her life in the city. They eventually established their home in the ranching community of El Sauz where they lovingly raised their four children. She was a homemaker who was highly skilled with her sewing machine fulfilling her love of fashion by sewing many garments for herself, her daughters, and her granddaughters.
Benita was preceded in death by her parents, her husband, 9 of her siblings, and her granddaughter Sandra Lou Chavez. She is survived by her children; Elma (Renato) Chavez, Mario (Amanda) Guerra, Roel (Ofelia) Guerra, and Maria Fabiola Guerra. Also surviving Benita is her youngest brother Hector (Dora) Gonzalez. Memories of her will be lovingly cherished by her 9 grandchildren, 11 great-grandchildren, and 5 great-great-grandchildren.
Visitation will be on August 18, from 5-8 pm with a 7 pm rosary at Sanchez Funeral Home in Rio Grande City. Funeral Mass will be at 10 am on August 19, at Nuestra Senora de Guadalupe Catholic Church, in El Sauz with interment immediately following at Guerra Cemetery.
Pallbearers will be Saulo Amaya, Jorge Barcenas, Carlos Chavez, Renato Chavez, Jr., Arturo
Perez, and Juan Angel Rosa.

To order memorial trees or send flowers to the family in memory of Benita Guerra, please visit our flower store.
Send a Sympathy Card