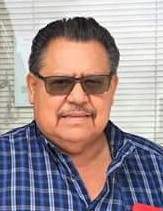 Benito Munoz, 65, entered into the glory of eternal life with his loving family by his side, on Friday, May 11, 2018.  He died at North Central Hospital in San Antonio, TX.  His is preceded in death by his mother, Dionicia Sanchez.  He was born in Roma, TX., and lived there until 2005 when he moved to the Austin area.  He was a resident of Rancho Nuevo/Roma, TX. until he moved to the Austin.  He graduated from Roma High School and attended UT Pan American College.  He moved to the Austin area in 2005 where is stared his own trucking business with his sons.  His survivors include his wife, Norma Ramon of 47 years.  His three sons all of whom live in San Antonio, Texas:  Benito E. Munoz, Marc A. Munoz, and Erik R. Munoz (Michelle).  His daughter of Rio Grande City, Texas: Myrna L. Lopez (Teodoro).  He is also survived by his father, Pedro R. Munoz and two brother, Jose R. Cano and Roberto E. Munoz (Melida).  He has 14 grandchildren and one great granddaughter.  Viewing will be held at Sanchez Funeral Home on Sunday, and Monday.  Mass services will be on Tuesday, at Immaculate Conception Catholic Church followed by the Interment in Roma, Texas.

To order memorial trees or send flowers to the family in memory of Benito Munoz, please visit our flower store.