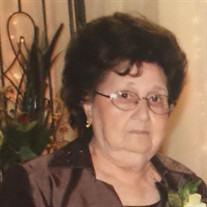 RIO GRANDE CITY - Dora T. Wagner, 87, died on Sunday, June 18, 2017 at Briarcliff Nursing and Rehab Center in McAllen, Texas. Sanchez Funeral Home of Rio Grande City will be in charge of her funeral services.
Dora T Wagner of Rio Grande City, passed away peacefully Sunday, June 18, 2017, at the age of 87.
She is preceded in death by her mother Petra Trevino, her husband Norman Glenn Wagner, her son Michael Steven Wagner, her brother Pedro Hinojosa, and her sister Lydia T. Piper

To order memorial trees or send flowers to the family in memory of Dora T. Wagner, please visit our flower store.
Send a Sympathy Card