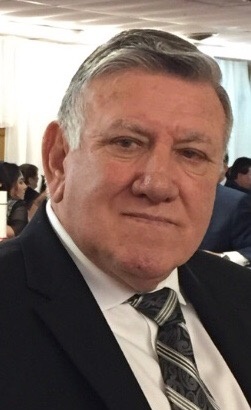 Duard B. McGuffin, Jr
Rio Grande City - Duard B. “Pinky” McGuffin, Jr. passed away on Thursday, January 14, 2021, at the Starr County Memorial Hospital.
Pinky was born on July 12, 1947, in Rio Grande City, TX. to Duard B. McGuffin and Thelma C. Saldana.  He is preceded in death by his parents.  Pinky is survived by his loving wife, Consuelo “Connie” T. McGuffin, daughter Deborah M. (Homero) Gonzalez, son Robert E. (Melissa) McGuffin, grandchildren Victoria B. McGuffin, Matthew A. Gonzalez, Garrett J. Gonzalez, and Carol M. McGuffin, sisters Carolyn M. (Erasmo) Lopez, Frances M (Charles) Roos IV, and brothers James H (Thelma) McGuffin, Patrick W. (Lamar) McGuffin, numerous nieces, nephews, aunts, uncles, and cousins.
He attended Immaculate Concepcion School and served as an altar boy for 8 years.  He then attended public school in Rio where he proudly played football with the Mighty Rattlers.  His jersey number was #71.  Upon graduating high school in 1965, Pinky attended Laredo Junior College and later married the love of his life and forever soul mate, Connie.  A year later, he was drafted into the Army but chose to enlist in the U.S. Army Reserve.  He was honorably discharged in 1973.  He then came home to work in the family’s oil and gas business (J& M Well Service).  He later formed his own Oil & Gas Service Company, Remco Services Inc.  He dedicated his livelihood to his family and his work.  He was a very kind-hearted, loving, and caring father who always put others ahead of his needs.  He had many friends and business acquaintances.  He was a member of the Knights of Columbus #2597.  He was a very proud grandfather who cherished every living moment spent with his grandchildren.  He will be dearly missed by all who knew him.
Services are under the direction of Sanchez Funeral Home in Rio Grande City.  The family has requested a Private Immediate Family only service.

To order memorial trees or send flowers to the family in memory of Duard B. "Pinky" McGuffin Jr., please visit our flower store.