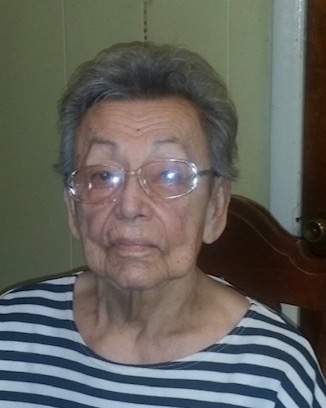 RIO~ Elida "Lela" Olivarez was called to be with the Lord on Sunday, August 21, 2022. May she Rest in Peace. Sanchez funreal Home of Rio Grande City will be taking care of her funreal arrangements.

Elida (Lela) Salinas Olivarez (July 23, 1934-August 21, 2022)
Elida was born in Rancho Nuevo, Texas and lived in La Rosita, Texas until she married Demetrio Olivarez in 1954 and moved to Rio Grande City. She was a devoted housewife for many years and was an excellent cook. Her kitchen and dining room were often filled with family, friends and delicious food. No one left hungry. Lela was also a seamstress sewing costumes for school plays and shows, all while raising her children Demetrio Jr. (deceased) and Nelda, and caring for her father-in-law Hilario Olivarez until his death in 1985. After many years as a housewife and mother she started working at the Rio Grande City High School cafeteria.

After serving as head cook at the cafeteria she took a job at the Community Daycare Center at the Plaza in Rio Grande City where she touched the lives of many children and parents. After a few years at the Day Care Center, she opened her own Day Care Center at home and continued to serve children and parents. She also helped raise many nephews, nieces, grandchildren, and great grandchildren. Lela was full of love and gave it fully to all. Throughout her life Lela was a devout Catholic and served many years providing the Rosary for bereaving families. She was also very involved in the Shoenstatt Apostolic Movement at the Immaculate Conception Church.

The Olivarez family would like to thank all family and friends who were part of Lela’s life. Special thanks to Juanita Rodriguez who served faithfully as Lela’s provider for 20 years and continues to serve the Olivarez family.

To order memorial trees or send flowers to the family in memory of Elida "Lela" Olivarez, please visit our flower store.