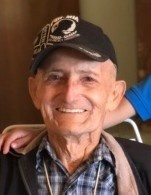 Rio Grande City - MSgt. Gilberto Trejo, United States Army, Korean War, Prisoner of War
Mr. Trejo peacefully passed onto the arms of his maker on April 23, 2020 at McAllen Medical Center; he was 88 years old. Mr. Trejo was born in Mission, Texas on June 18, 1931; he was an orphan at the age of four and was raised by his grandmother, Beatriz Garza and uncle, Viterbo Molina in Los Garzas. Soon thereafter, Mr. Trejo became a long-time resident of Rio Grande City, Texas. He was a great leader, beloved teacher, was intelligent, and talented and had an unparalleled work ethic. Mr. Trejo’s talent included the ability to build homes and build and repair just about anything in them. He also had a talent for playing the guitar beautifully and had inherited a wonderful voice; his family could often be found enjoying their father singing the most beautiful Latin ballads throughout their lives. Mr. Trejo was loved unconditionally by his family and was admired and highly respected by his students and colleagues. He was a husband, son, brother, father, grandfather and great grandfather. He was a man who has left a legacy for his family, community and this country. On May 24, 2013, a plaque unveiling ceremony was held for Mr. Trejo. The Korean War Marker was dedicated in honor of his heroism and service and is currently located at the Starr County Courthouse Annex.

Mr. Trejo graduated from Rio Grande City High School in 1950, the year he enlisted into the army. He voluntarily served various tours in the Korean war conflict and received many accolades and medals of honor for his bravery and heroism. Mr. Trejo was head of artillery and led his platoon while commissioned to the battle of White Horse from 1950-1953. In 1953, he and his platoon were held captive for several months until the war ended, when all prisoners were released. After a lengthy hospitalization at a military hospital, he returned to Starr County in 1953. He married Ernestina Hernandez Trejo in 1955 and raised 6 children. He worked as a building contractor in the Rio Grande Valley for 20 years. In 1968, he received a Mathematics degree from Texas A & M and retired after serving 28 years as a high school teacher and building trades instructor at RGC CISD. Throughout the years, Mr. Trejo served in various leadership capacities, including Commander for Disabled American Veterans & Veterans of Foreign War posts in Starr County. He led hundreds of burials for Starr County veterans, including gun salutes and serving families with the American flag. He also received many awards from the Veterans of Foreign Wars. After retirement, he spent the last years of his life playing the lottery with the critical analysis of a true mathematician. Mr. Trejo loved attending the activities with his wife and participants at the Senior Center.

Visitations will be held on Friday, May 8, 2020 from 11 AM-6 PM.  Viewing will continue Saturday, May 9, 2020 from 8 AM-9 AM. Interment will follow at 10 AM with a military burial service at the City Cemetery. Funeral arrangements are under the direction of Sanchez Funeral Home of Rio Grande City.

The family of Mr. Trejo would like to extend their sincerest and unending gratitude to the personnel and medical staff of the Alfredo Gonzalez Veterans Home in McAllen, El Cenizo Senior Center in Rio Grande City, Starr County Memorial Hospital and McAllen Medical Center in McAllen for their kindness and great care of Mr. Trejo. A special gratitude is offered to the Commissioner’s Court of Starr County and the historical commission members, to, Mr. Samuel and Mrs. Maria Elia Ramos of Rio Grande City. In the end, our prayer is for all to find peace. “We shall find peace. We shall hear the angels; we shall see the sky sparkling with diamonds”, Anton Chekhov

To order memorial trees or send flowers to the family in memory of Gilberto Trejo, please visit our flower store.