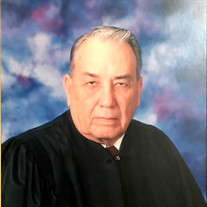 John A. Pope III entered into the loving presence of his Heavenly Father on June 9, 2017 at the age of 86. He was a man who loved his family deeply and had a strong faith in God. He has a "Larger than life" personality and was passionate about everything he did. He will be greatly missed by all who were blessed to know him.
John Pope was born on June 9, 1931, to John A. Pope Jr. and Raquel Valle Pope in Rio Grande City, Texas. He attended Immaculate Conception School in his early years and graduated from St. Joseph's Academy in Laredo, Texas. At the age of 17, he enrolled at Texas A&M College and graduated in 1952. After A&M, he attended St Mary University school of Law in San Antonio, Texas. He served in the US Army and was a longtime member of the Army Reserve.
In 1955, he entered into private practice with his father. Over his lifetime, he has held the offices of School Board Member, County Attorney, District Judge 381st District Court, Partner at Atlas & Hall, and Assistant District Attorney. He was also a member of Immaculate Conception Church, the Knights of Columbus, Lions Club, Charter member of the Rio Grande City Rotary Club and the State Bar Association of Texas.
"I have fought the good fight. I have finished the race. I have kept the faith." 2 Timothy 4.7
We are so thankful for the years filled with laughter and love that we have had with him. He impacted many lives and was loved by many and will be missed by everyone.
John was preceded in death by his parents, Mr. and Mrs. John A. Pope Jr. and his nephew John Andrew Olson.
Left to cherish his memory is his loving wife Ana Ma. Pope, his daughter Mayela Teresa Pope and son John A. Pope IV, his sister Dollie P. Olson and brother Bill D. Pope Sr., his nieces Leslie O. Ruffino and Rachel Pope-Assion, his nephew Bill Douglas Pope, cousins Andrea Lerma, Charles A. Christesson and Evonne Valle and numerous grand-nieces and nephews. Grateful appreciation is given to his loyal secretary, Elda Castillo, who served faithfully and loyally since 1972.
May the road rise up to meet you, may the wind be always at your back, may the sun shine warm upon your face, and the rain fall soft upon your fields (Ranch) and until we meet again. May God hold you in the palm of his hand.
His memorial service will start on Tuesday, June 13, 2017 from 10:00am till 1:30pm, Holy Rosary will be recited at 12:00 noon the same day, His Funeral Mass will be at 2:00pm Immaculate Conception Catholic Church in Rio Grande City, Texas. A Military Burial will follow to bury his ashes, after mass. All funeral arrangements are under the direction of Sanchez Funeral Home of Rio Grande City.
In lieu of flowers, the family requests that gifts be made to the Judge John Pope '52 Endowed Opportunity Award Scholarship. Checks should be made payable to the Texas A&M Foundation and mailed to 401 George Bush Drive, College Station, TX 77840-2844. Please note on your check Pope EOA Scholarship.

To order memorial trees or send flowers to the family in memory of John A Pope III, please visit our flower store.
Send a Sympathy Card