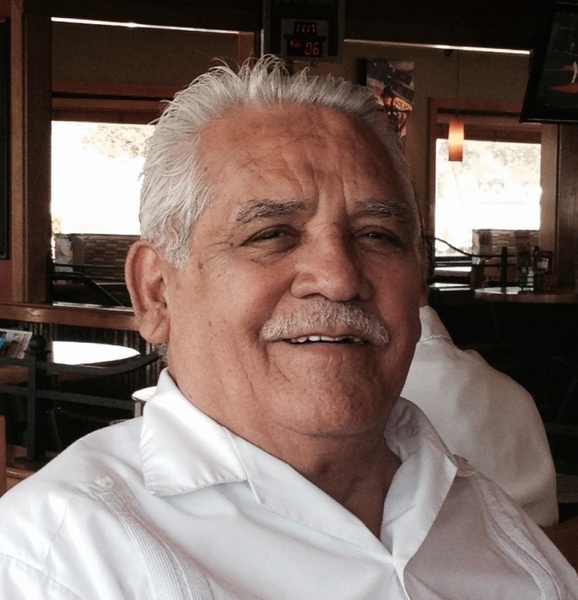 RIO GRANDE CITY - LAMAR SERVANDO CASTANEDA, 83, DIED ON FRIDAY, MARCH 20, 2020 AT HIS DAUGHTER'S HOME IN AUSTIN, TX.  SANCHEZ FUNERAL HOME OF RIO GRANDE CITY WILL BE IN CHARGE OF HIS FUNERAL ARRANGEMENTS.

At the young age of nine, Servando became a baker’s apprentice by working at his family’s bakery and grocery store located at 102 North Texas Street Rio Grande City, Texas.  He continued this profession until he was thirty years old.  During this tenure, Servando continued his primary and secondary education.  After high school, Servando attended two years of higher education at Pan American College, Edinburg, Texas seeking a degree in Business Administration.  While in college, Servando enlisted in the United States Army Reserve earning an Honorable Discharge with the rank of Sergeant First Class.

During this time, big changes occurred in Servando’s life.  His parents passed. He met and married Nelia.  His three children were born.

Deciding to make a career change from his family business, Servando gained employment with an Aircraft Manufacturer in Dallas, Texas. In this capacity, he was elected to be one of the United Auto Workers (UAW) Union Representative and organizer, but his true lifelong profession would be Long Haul/Interstate Trucking.  He owned a Trucking business, traveled all the 50 states and several Canadian Provinces.  Servando finally retired from this profession and was looking forward to relaxing, but it was not to be so.

After retiring from trucking, but yet an energetic young Senior Adult, he began working with his brother, Ernesto Castañeda as a Bounty Hunter for Castañeda Bail Bonds of South Texas.  After several years of sleepless nights, early mornings, and 24 hour days, Servando decided to truly retire.

Servando loved animals, dogs were special to him, but his true heart belonged to horses.  He was the owner of several thoroughbred horses, one in particular named, Amazing Time.  Servando’s trainer used his son to race the horse, a little known teenage jockey at the time, Patrick Valenzuela, who later won the Kentucky Derby.

Servando enjoyed a civic organization known as the Greater Southwest Optimist Club where he would participate to help raise funds for High School Scholarships.  He was an advocate for higher education and encouraged anyone towards achieving more so they could become greater in life.  He was a Life Optimist.

Football was a passion that moved, angered, and thrilled him.  Dallas Cowboys, Houston Texans, Texas Longhorns, these were his Teams, but he never did like the new owner of the Cowboys.  Servando was an excellent dancer, loved music, having fun, loved to joke around, had a sharp sense of humor, and enjoyed life to the fullest.  One of his favorite phrases was, “All Right, All Right, All Right” before he got going on something he was doing, we always wondered if that famous Austin actor stole his phrase.

But, after all, is said and tallied, Servando only had one true, a lifelong passion, his wife Nelia.  To this, there is no doubt and will ever be a doubt to anyone that knew him.  Servando fell in Love with the girl in the polka dot dress that he saw across the street one day, in Miguel Aleman, Tamaulipas and said to himself, “That’s the girl I am going to marry”, Servando did marry her, and Loved her to the last moment.

To order memorial trees or send flowers to the family in memory of Lamar Servando Castaneda, please visit our flower store.