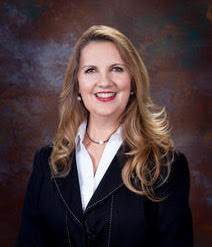 It was a cool, fall evening in 1999 when Leticia O. Lopez returned to her home in Rio Grande City, Texas. She had spent the last several weeks at MD Anderson Cancer Center in Houston where she was receiving chemotherapy to treat her breast cancer. As she laid her head to rest, the telephone rang. Leticia had worked as a high school guidance counselor, and on the line was one of her former students who was experiencing a crisis, and seeking guidance and support. “Pass me the phone”, Leticia said.

This was who Leticia was. She committed her life to extending compassion, and easing others’ pain. Her selfless spirit was matched only by her radiant smile. Despite the immense health challenges she faced in her decades long battle with cancer, she always put the needs of others before her own.

She was born in Weslaco, Texas to Luis and Leonila Oliveira. Her father Luis, became disabled in his youth after suffering a gun shot wound. Leticia, even in her final weeks, spent her life coordinating her father’s medical appointments, and providing for his needs. Leonila was a migrant farmworker, and Leticia often recounted the life lessons they learned together in the cotton fields of West Texas.

Leticia graduated with a Bachelor’s Degree from the University of Texas Pan American. She began her career in education as an elementary school teacher, before becoming a guidance counselor. She reached remission with her first case of cancer in 2000, however her malignancy recurred in 2001. She returned to MD Anderson to resume treatment.

After achieving remission with her second case of breast cancer, she returned to school to earn her Master’s degree in education. She would later serve as the principal of La Grulla Elementary School in Starr County, a role she beloved above all others in her career.

In 2009, she was diagnosed with stage IV breast cancer. Unphased, she returned to MD Anderson once again to resume chemotherapy. While confronting her condition for the third time, she remained steadfast in her commitment to serving others, and in her faith as a Roman Catholic.

She became more involved in her community. Outside the walls of the classroom, she served as a local and regional leader for the Catholic Daughters of America (CDA). As part of CDA, she mentored young women in Rio Grande City, and supported their pursuits of higher education.

In 2016, she was elected as board member to the Rio Grande City Consolidated Independent School District, where she completed a four year term.

Leticia believed firmly in treating all persons with respect, dignity, and kindness. She sought to find joy in all things. She loved her sister Lourdes, her friends and family, and Paras, Nuevo Leon.

She is survived by her husband Leo Lopez Jr, whom she married in 1986, three sons – Leo, Luis, and Lisandro, and two grandchildren Lisandro Jr. and Nylah Leticia.

To order memorial trees or send flowers to the family in memory of Leticia O. Lopez, please visit our flower store.
Send a Sympathy Card