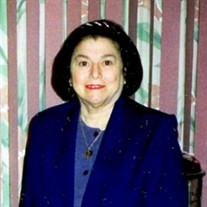 Mary Elizabeth Doyno, the daughter of the late Mr. and Mrs. Frank Doyno of Rio Grande City, entered into eternal life on August 18, 2016 at Doctor's Hospital at Renaissance in McAllen, Texas.
Born in Rio Grande City, and reared in historical Fort Ringgold, she attended the Immaculate Conception School and graduated with honors from Rio Grande City High School.
Upon her high school graduation, she attended Pan American College in Edinburg, Texas and graduated from Texas State College for Women in Denton, Texas where she received a Bachelor of Science Degree. Later, she received a Master of Education Degree from Texas Woman's University.
She began her teaching career with the San Isidro Independent School District in San Isidro, Texas where she taught high school home economics. In the 1957-1958 school year, she began working for the Rio Grande City Consolidated Independent School District where she continued teaching high school home economics. Upon receiving her master's degree she began teaching English where she served as Department Chairperson for several years. During her tenure as a high school teacher, she was a Future Homemaker of America sponsor, National Honor Society sponsor, Class sponsor and UIL Sponsor. She was also a member of the Rio Grande City High School Advisory Committee and Handbook Committee.
In 1990, she retired after 35 years of service. During that same year, her biography was included in Who's Who in American Education by the National Reference Institute. She was always elated to see and to hear from her former students and to know that their career dreams had become a reality.
Mary Elizabeth was a parishioner of the Immaculate Conception Church where in her youth she sang in the church choir. During her college years, she was an active member of the Catholic Newman Club in Denton, Texas. She was also a life member of the Texas State Teachers Association.
While serving her community, she was honored in 1970 by being named Best Conservation Teacher of the year by the Starr County Soil and Water Conservation District. On another occasion, she received the Voice of Democracy Citation Award from the Veterans of Foreign Wars of the United States and the Ladies Auxiliary.
One of her favorite pastimes was traveling during the summer months. She visited 39 states of the United States and traveled to several places in the continent of Europe, Africa, North America and also the islands in the Caribbean.
Mary Elizabeth was preceded in death by her beloved parents Frank and Sinforiana G. Doyno, her sister Pauline S. Doyno, her brothers Paul Michael Doyno, and Frank George Doyno, and sister-in-laws Elma P. Doyno and Lydia C. Doyno.
She is survived by her nephews Dr. Paul Michael Doyno, Jr. of McAllen and Frank George Doyno, Jr. (Cary) of Huntington Beach, California, niece Gladys Marie Doyno Black (Kevin) of McAllen, grandnephew Ian David Llewellyn of McAllen, and great-grandniece Maya Nichole Llewellyn of McAllen. She is also survived by numerous cousins and their families.
Visitation will be held on Sunday, August 21, 2016 from 3:30pm to 9pm with rosary scheduled for 7pm at Sanchez Funeral Home located at 301 E. 2nd St, Rio Grande City, Texas. Funeral Mass will celebrated at 11am, Monday, August 22, 2016 at Immaculate Conception Church located on 101 E. Canales St, Rio Grande City, Texas followed by burial at Rio Grande City Cemetery.

To order memorial trees or send flowers to the family in memory of Mary Elizabeth Doyno, please visit our flower store.
Send a Sympathy Card