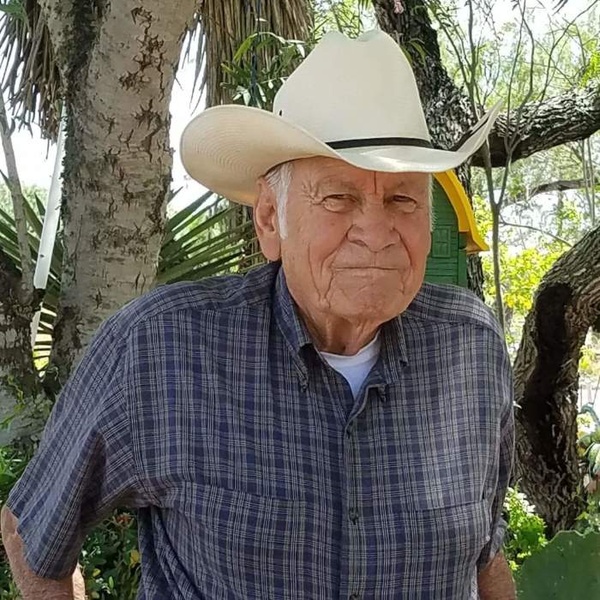 On Tuesday, September 17th, 2019, Ramiro Victorino Pena, loving husband and father of 4 daughters passed away at the age of 91.  He was born in San Isidro on November 8th, 1927 to Santiago Pena, Jr. and Cecilia Diaz.
On October 10th, 1950, he enlisted in the United States Army to fight in the Korean War. When he returned, he married Alice Ahearn and moved to San Antonio, TX to raise their 4 daughters. Ramiro was a hard working man, always thinking of his family to provide for them. After 30 years as an aircraft structures mechanic at Kelly AFB, he and Alice retired back to his ranch in San Isidro.  He worked diligently clearing brush, trees, mending fences, raising cattle and to build his home for himself and Alice.  He was hardworking, knowledgeable, skillful and passionate in everything he set out to do. His passion was Ranchlife. He loved his ranch in San Isidro, TX, to wake up each morning with a cup of coffee and soak in the sounds of nature and to close each evening with a beer in his hand and watching the birds he fed daily.  He is survived by his wife Alice of 63 years. His 4 daughters and 2 son-in-laws, Veronica & Wayne, Velma & Archie, Verna and Velda. 10 grand kids, Amy (Chad), Carrie, Crystal (Gilbert), Kimberly (Joey), Robert, Casey, Clinton, Cody, Alexander and Aric and 6 great grandkids.

To order memorial trees or send flowers to the family in memory of Ramiro Victorino Pena, please visit our flower store.