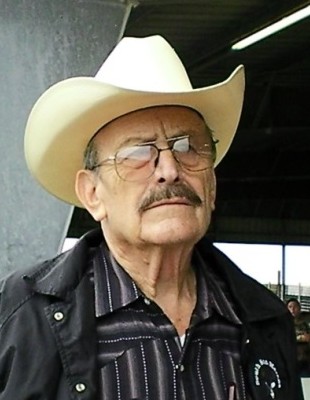 McAllen, Texas - The world has lost a legend in our eyes.  Our revered father, Rolando Alaniz, 87, passed away on Sunday, January 17, 2021, after a long battle with Alzheimer's.  He was born on his family's ranch in Santa Elena, Texas to Marcelino and Beatrice Alaniz.

Rolando enlisted in the Army and proudly served his country.  Being shipped to Japan by sea, Rolando always said he thought that he would never return to the United States.  Sealife wasn't for him.  Dad said he spent the entire time onboard the ship hanging over the boat railing, and he didn't want to ever step foot on another boat again and repeat that experience.  But, the love of his family brought him back home after his term in the Army was over.

Working in Rio Grande City, Rolando was again reunited with the young lady that he knew as Evelyn Payne.  Their romance blossomed.  When Evelyn moved to North Texas, Rolando couldn't take it.  He drove up there, picked her up, and they were married.   Their fairy tale life spanned states as they moved their young family from Rio Grande City to Anaheim, California to Dallas, Texas, and back until they finally returned to the valley to live near family.

Values were important to Rolando.  He raised his children and grandchildren to know the values of honesty, respect, and hard work.  He always reminded them that if they weren't ten minutes early to work, they were late.  It's no wonder that when he retired from Johnson Controls that he went on to find another job, and then another.  Even in his later years, he liked to keep busy working whether it was with his beloved cows or in the yard.

In lieu of flowers, the family is suggesting donations be made to the Shriners Hospital for Children or St. Jude Children's Hospital, causes near and dear to Dad's heart.

For the safety of all, strict COVID procedures will be followed during the family only viewing on Wednesday, January 20, 2021, from 1:00 pm to 7:00 pm.  An immediate family only ceremony will be held on Thursday, January 21, 2021, at 10:00 am.  As per Dad, the only place he ever wanted to be late was his own funeral.  So out of respect for him, we will be at least ten minutes late starting his services.  Sanchez Funeral Home in Rio Grande City is in charge of the funeral arrangements.

To order memorial trees or send flowers to the family in memory of Rolando Alaniz, please visit our flower store.
Send a Sympathy Card